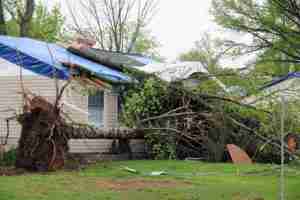 Tornadoes are nature’s most violent storms. Spawned from powerful thunderstorms, tornadoes can cause fatalities and devastate a neighborhood in seconds.

A tornado appears as a rotating, funnel-shaped cloud that extends from a thunderstorm to the ground with whirling winds that can reach 300 miles per hour. Damage paths can be in excess of one mile wide and 50 miles long. Every state is at some risk from this hazard.

Some tornadoes are clearly visible, while rain or nearby low-hanging clouds obscure others. Occasionally, tornadoes develop so rapidly that little, if any, advance warning is possible.

Before a tornado hits, the wind may die down and the air may become very still. A cloud of debris can mark the location of a tornado even if a funnel is not visible. Tornadoes generally occur near the trailing edge of a thunderstorm. It is not uncommon to see clear, sunlit skies behind a tornado.

The following are facts about tornadoes:

Be alert to changing weather conditions.

If you are under a tornado WARNING, seek shelter immediately!

Extreme windstorms in many parts of the country pose a serious threat to buildings and their occupants. Your residence may be built “to code,” but that does not mean it can withstand winds from extreme events such as tornadoes and major hurricanes. The purpose of a safe room or a wind shelter is to provide a space where you and your family can seek refuge that provides a high level of protection. You can build a safe room in one of several places in your home:

Safe rooms built below ground level provide the greatest protection, but a safe room built in a first-floor interior room also can provide the necessary protection. Below-ground safe rooms must be designed to avoid accumulating water during the heavy rains that often accompany severe windstorms.

To protect its occupants, a safe room must be built to withstand high winds and flying debris, even if the rest of the residence is severely damaged or destroyed. Consider the following when building a safe room:

Being prepared is the most important thing you can do to protect yourself and your family from a tornado,

If your home should suffer any weather related damage, 24Restore understands Minnesota weather and as fast as the weather struck, 24Restore will be there to repair your home.