This week I was absolutely moved to tears by the heartfelt gestures of one of our team members, Jesse Jackman.

Jesse is one of 24Restore’s Network Development Partners. He has been with the company for 6 years. During that time, I have watched Jesse grow professionally and personally like no other.

Jesse went out to fire loss the other night and said it is was one of the hardest and most heartbreaking fire losses he has ever been to. The family had cats in the house and Jesse was able to find 3 of them. Sadly they did not make it, so Jesse helped the family bury them in the backyard until they emotionally couldn’t do it anymore. Jesse continued until it was done.

After burying the families pets, he noticed their 2 young children were only wearing diapers. They had just lost everything they owned. Jesse had stopped at this fire with his family in the truck, his wife, and 3 boys. So he went to his truck where they were waiting and took the clothes off his 2 oldest boys and gave them to the kids.

Jesse was able to walk away with a truckload of their family photos that hopefully can all be saved by our contents department! It is amazing what they can restore from smoke or fire damage. You just can’t put a price on special heirlooms and family photos!

Look at the smiles on these 2 boys after literally giving the shirts off their backs to help this family! 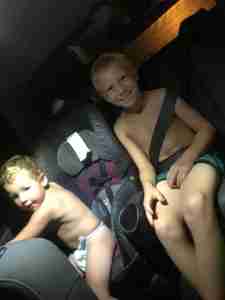 Jesse, you are an outstanding role model for your boys, this will impact them forever! You are also an amazing asset to Team 24Restore, thank you for all you do and all the help you give to homeowners in probably the worse disaster of their life. Thank you!